Air travel picking up. Where can you fly right now? 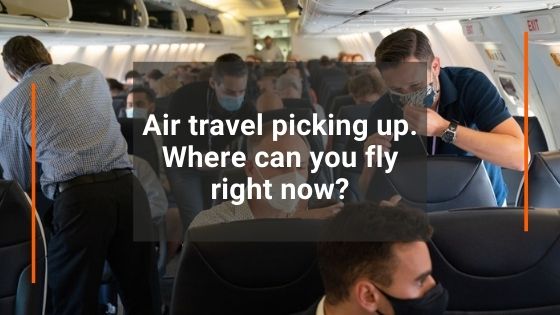 With some countries in Asia starting to frame Covid-19 as a disease that needs to be managed rather than stamped out, there’s hope 2021 may not be the total travel writeoff feared a few months ago.

Speaking in parliament earlier this week, Singapore Finance Minister Lawrence Wong said that while the coronavirus is unlikely to go away any time soon, rising vaccination rates and improving treatments mean it can be thought of “more like influenza.” Similarly, Australian Prime Minister Scott Morrison has promised a “new deal” that would shift the country’s strategy from suppressing the coronavirus to managing it.

Thailand, meanwhile, has reopened the tropical island of Phuket to holidaymakers, so long as they’re vaccinated, and on Tuesday, Hong Kong Chief Executive Carrie Lam, mulling the start of a long-anticipated travel bubble with Singapore, indicated both sides should require inoculation as a precondition for participating. And India has increased domestic flight capacity to 65% from 50% as its recent wave of infections ebbs.

Such moves are buoying expectations about freer travel toward the end of the year. For now, Asia can only look on in envy as people crowd tourist hotspots in Europe and New York gets back to business. But there’s hope that by Christmas, borders can start to reopen.

“We’re seeing an acknowledgment, including in countries where there have been a lot of strict restrictions, that this is a virus that doesn’t fully disappear and instead is one we live with and manage,” said David Mann, chief Asia economist at Mastercard Economics Institute. “Restrictions will be on a loosening trend if you take a six- to 12-month view, especially in places where they’re making progress on vaccinations.”

Green shoots are beginning to show in airline seat capacity. After flatlining for more than 12 months, positive signs have started to emerge this month, according to flight-tracking firm OAG. Forward projections for August and September are more robust.

China and Russia have both surpassed 2019 capacity levels, though like in the U.S., the strength comes from their large domestic markets, while overseas travel remains limited.

Europe continues to make swift gains after trailing most other regions for the bulk of the pandemic. People can now move relatively freely within the European Union, facilitated by an app that tracks Covid status, as vaccine rollouts gather momentum across the bloc’s 27 member states.

The U.K.’s rapid inoculation program could finally start to pay off, after the delta virus thwarted a quicker return to the skies. The government plans to eliminate a self-quarantine requirement on vaccinated arrivals from medium-risk countries. London Heathrow airport reopened a second runway and will resume normal operations in a terminal used by Virgin Atlantic Airways Ltd. and Delta Air Lines Inc.

The U.S., one of the drivers of recent global gains, has seen progress stall as airlines continue to battle capacity constraints. Delays and cancelations have hit Southwest Airlines Co. and American Airlines Group Inc., among others, as they try to keep up with rising demand.

Flight-tracking firm Cirium is finding limited progress toward restoring connections between key cities within Asia, as well as with major external hubs. Data for June show the number of flights between Singapore and Bangkok have doubled since January, although they’re still well below pre-Covid levels.

Another route seeing significant pick-up is Hong Kong-London, with bidirectional travel over a seven-day period averaging 155 flights in June, up from 39 in January. (From July 1, however, Hong Kong banned all flights from the U.K. to curb the spread of the delta variant.)

“We believe the pent-up demand in Asia Pacific, exacerbated by extended lockdowns, will follow a similar trajectory in both business and leisure travel as the region cautiously re-opens its borders,” Mastercard’s Mann said.

Others aren’t so sure. In May, international traffic in the Asia-Pacific region stood at just 4.3% of the level it was two years earlier, before Covid hit, according to the Association of Asia Pacific Airlines. And there have already been setbacks to even modest reopening plans.

Thailand’s Prime Minister, Prayuth Chan-Ocha, is isolating at home after he came into close contact with a person who later tested positive for Covid during events held to mark the reopening of Phuket. And the country’s so-called sandbox initiative hasn’t been an instant success — expectations are low with only 100,000 foreign tourists forecast to arrive in the third quarter, compared with more than 2.5 million a quarter pre-pandemic.

China, a key force behind travel in the region, needs to reopen before aviation can recover in any meaningful way, said John Grant, chief analyst with flight tracking firm OAG.

“I’m not that optimistic for Asia in its broadest context,” Grant said. “Specific country markets such as Thailand and perhaps to a lesser degree Vietnam that can allow markets such as Europe to re-open will have some benefit, but it will be marginal in the grand scheme of things.”

The spread of the Covid variants in Asia has contributed to concerns that airlines could miss out on the travel season for a second year. Malaysia is still in various stages of lockdown and Indonesia recently tightened measures on free movement in Bali and Java. New Zealand also last month temporarily suspended the quarantine-free travel arrangement with Australia after a spike in delta-variant cases.

Vaccine hesitancy in some quarters is another issue. In the Philippines, 68% of people are either uncertain or unwilling to take a Covid shot. Singapore, meanwhile, intends to inoculate two-thirds of its 5.7 million-strong population by National Day on Aug. 9 but hasn’t said what relaxations may follow.

“Renewed concerns over the appearance of new Covid variants have held back any meaningful reopening of borders,” said Subhas Menon, director general of the AAPA. “This will have a negative impact on airline survival, and additional government support will likely be required.”