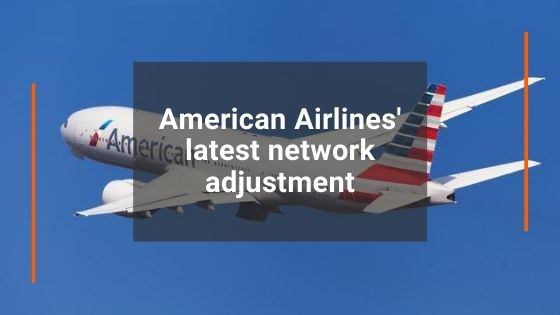 Over the weekend, the Fort Worth-based carrier published its fall schedule, which included a bunch of changes networkwide. Most notably, American is dropping two routes from Philly, while adding two others from Chicago, as first seen in Cirium schedules and later confirmed by the airline.

American’s Philadelphia hub is the big loser with routes to Des Moines, Iowa (DSM), and Omaha, Nebraska (OMA), getting cut from the airline’s map.

The carrier last flew from Philly to DSM and OMA in August and September of last year, respectively. Both routes were originally slated to resume with daily service just over one year later, in November 2021.

As for Chicago, the Windy City will see new American service to the two largest airports in Costa Rica: San Jose (SJO) and Liberia (LIR). By flying both to the capital and to Liberia on the west coast, American will offer travelers a comprehensive schedule for exploring this Central American country.

Service between Chicago O’Hare (ORD) and SJO begins on Nov. 2 with three weekly flights. Service to LIR will be operated once weekly on Saturdays, beginning on Nov. 6. American will deploy a 172-seat Boeing 737-800 — a notoriously uncomfortable aircraft for a roughly five-hour flight — on the new Costa Rica routes.

For now, the new flights are scheduled seasonally, with service ending in the middle of spring, but it’s possible that AA upgrades them year-round should demand warrant.

American will go head-to-head against United Airlines, which also operates a massive hub in Chicago, on the new Costa Rica routes.

For AA, Chicago marks the sixth destination with regularly scheduled nonstop flights to Costa Rica, joining four other hubs: Charlotte, Dallas/Fort Worth, Miami, and New York-JFK. Additionally, as part of the airline’s recent expansion in Austin, the carrier has added a slew of new routes, including short-haul international service to Liberia.

Combined, AA’s move to boost flights to Costa Rica, while trimming down service to secondary domestic cities, is seemingly another pandemic-era play to cater to leisure travelers, who’ve largely returned to the skies. (Along with the new Costa Rica routes, American also extended the schedule on its New York-JFK to Jackson Hole, Wyoming flight through the winter season — another leisure-focused play for skiers and snowboarders.)

Even without Philly, the carrier is still scheduled to fly to Des Moines from six airports nationwide, and to Omaha from seven, including from Charlotte on the East Coast.

Before the pandemic, Philadelphia was American’s primary connecting gateway for transatlantic travelers headed to Europe. Without business travel, American seemingly doesn’t see the demand to warrant flights from Des Moines and Omaha to Philly, which no longer offers as much connectivity as it once did. If someone needs to get from Omaha to London, they can connect through Dallas/Fort Worth or Charlotte instead.

Ever since merging with US Airways and inheriting the carrier’s Philly hub, American positioned Philly as the premier transatlantic gateway. However, in recent years, American has added new European routes from New York, while focusing much of its domestic connectivity through Dallas/Fort Worth and Charlotte, leaving Philly as a hub without a clear-cut strategy — especially during the ongoing pandemic.