Mask mandate during air travel, other public transport will be extended until January 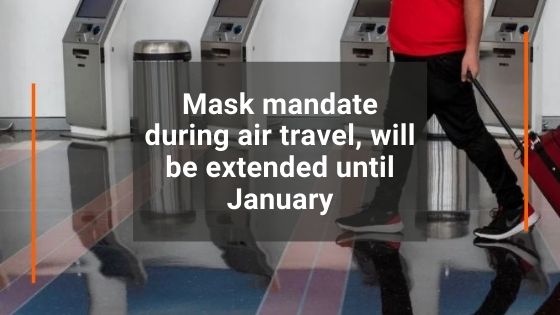 The Transportation Security Administration confirmed to the Points Guy Tuesday evening that the federal government is extending a mask mandate on public transportation through January.

In a statement to a spokesperson said, “TSA will extend the directives through January 18, 2022. The purpose of TSA’s mask directive is to minimize the spread of COVID-19 on public transportation.”

U.S. airlines were briefed on the planned extension on Tuesday morning, a source, who spoke on background because they were not permitted to discuss the topic with media, confirmed to TPG. The Transportation Security Administration (TSA) and Centers for Disease Control and Prevention (CDC) plan to announce the extension publicly later this week or early next, the source said.

The TSA is the agency that sets the mandate.

The current mask order was set shortly after the Biden administration took office in January, and has remained in place since. It requires face masks to be worn by travelers on all public forms of transportation, including airplanes, trains, buses, taxis, cruise ships, and ferries, as well as at terminals such as airports and train stations.

The extension comes as cases rise and hospitals fill across the U.S., particularly in regions with low rates of vaccination, largely driven by the spread of the aggressive delta variant.

In May, the CDC backed off its indoor mask use guidance for vaccinated Americans, although the requirement remained in place for travel. The CDC has since reimposed guidance as breakthrough cases become more common.

“Right now for travel, we are asking people to continue to wear their masks,” CDC Director Dr. Rochelle Walensky said in May. “We are going to be looking at all of our guidance and updating all of our guidance, including our travel guide.”

Over recent months, an increase in unruly passenger incidents aboard aircraft has been linked partly to the enforcement of the mask mandate, particularly as mask usage has become increasingly politicized.

U.S. airlines, through trade organization Airlines for America, said in a statement that they would continue to enforce the mandate.

“As they have done for months, U.S. airlines will comply with the federal mask mandate and strictly enforce this requirement in collaboration with the TSA and the FAA,” the statement said.

Sara Nelson, president of the Association of Flight Attendants, praised the expected extension of the mask mandate on Tuesday.

“We have a responsibility in aviation to keep everyone safe and do our part to end the pandemic, rather than aid the continuation of it. Air travel is one of the most controlled indoor spaces with layers of safety protocols that make it possible to serve our communities,” Nelson said in a statement.

“Administrator Pekoske’s decision in coordination with the Biden administration to continue the TSA enforcement directive for the CDC transportation mask mandate will help tremendously to keep passengers and aviation workers safe,” she added, referring to TSA head David Pekoske.