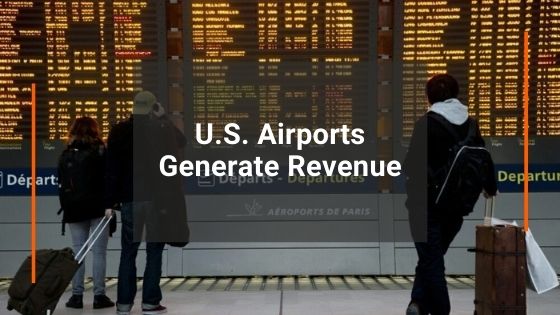 DESPITE RECEIVING RELIEF FROM CONGRESS, COMMERCIAL AIRPORTS ACROSS THE COUNTRY ARE HURTING 13 MONTHS AFTER COVID-19 IMPACTED AIRLINES AND THE TRAVEL INDUSTRY. TERMINALS THAT WERE ONCE BUZZING WITH TRAVELERS ARE NOW ECHO CHAMBERS, AND WHILE IT’S A BREEZE FOR PASSENGERS TO GET THROUGH, IT’S A TREMENDOUS LOSS IN REVENUE FOR AIRPORTS.

Airports Council International-North America (ACI-NA), the trade group representing commercial airports in the United States and Canada, is projecting airports across North America will lose $40 billion for the two-year period between March 2020 and March 2022.

“These mounting losses, coupled with increased operational costs, will impede airports from investing in much-needed infrastructure projects, at a time when they continue to foot the bill for extensive facility upgrades and enhanced health and safety practices to limit the spread of Covid,” ACI-NA President Kevin M. Burke said.

Cincinnati/Northern Kentucky airport has been leaning into new technologies and innovative approaches to improve the experience for travelers, create efficiencies for business partners, enhance revenue, and reduce costs. The airport innovation team is looking at various opportunities for new revenue streams and revenue sharing through partnerships with startups, universities, and more said airport spokesperson Mindy Kershner.

“We have diversified our operations over the last five to 10 years with a strategic focus on recruiting and supporting air cargo carriers for their growth and development. We are in a unique position as home to two air cargo hubs: DHL Express Global Superhub of the Americas as well as Amazon’s Air Hub,” said Kershner. “The shift to e-commerce during the pandemic and continued air cargo growth has been critical in protecting aeronautical revenue streams during this lull in passenger traffic.”

Another focus of the airport is land development and trying to secure long-term leases for tenants and developers, she said.

“Rather than sell land at a one-time price, these leases are providing long-term revenues for the airport. This has been successful with more than 200 acres of land developed by multiple tenants since 2015 alone,” Kershner said.

In the Bay Area in California, golf is king at Oakland International airport.

Roberto Bernardo, an airport spokesperson, cited an example of a business that has performed well during the pandemic: Metropolitan Golf Links golf course, located on airport land. “Golf has been one of the more popular outdoor recreation opportunities available throughout the pandemic,” he said.

Bernardo said the anticipated revenue to the Port of Oakland generated by Metropolitan Golf Links which is operated by Oakland Golf and sitting on property owned by the airport, is $224,000 for the fiscal year 2020-21. In an agreement with the city of Oakland, which the Port of Oakland leases the land, the two split the profits generated from the rent equally.

In New Mexico, the Albuquerque International Sunport is focusing on non-aeronautical revenue, including leasing undeveloped land at the airport to fill the gap in lost revenue and bring back jobs to the community, said Jonathan Small, an airport spokesperson.

“Another program we’ve developed to help generate non-aeronautical revenue is a new in-house advertising program. We saw an opportunity to bring the program in-house and receive 100 percent of revenue with assets we currently owned, without needing to make a substantial capital investment,” said Small.

Small said they’ve had to get creative to cut costs and avoid layoffs.

“In some cases, we have reallocated resources to take advantage of other areas of opportunity. Land development is a great example of this. The Sunport owns quite a bit of land around the airport itself, so we ramped up efforts to promote and lease various parcels of land,” Small said. “We currently have several significant deals in progress, which will not only generate revenue for us, but the corresponding developments on that land will provide a massive economic boost for our community and the entire state of New Mexico.”

Small said the the airport owns several commercial properties that are all currently leased or in the process of being leased. Additionally, it has agreements with a hotel and four offsite parking lots that generate income.

Although Small declined to provide specific revenue numbers due to the ongoing deals for lands and advertising, he acknowledged that the non-aeronautical revenue is helping offset lost revenue.

“PBI continues to take considerable revenue loss to our concessions, variable airline fees, and parking over the past year. That being said, PBI has a diverse revenue stream, including several off-site commercial developments such as two hotels, a Toyota dealership, warehouses, and the Drive Shack,” said Lacy Larson, an airport spokesperson.

Additionally, the airport leases land to a career resource center, and it has long-term, 30-year leases to Dunkin’ Donuts/7-Eleven that aside from rent also pays the airport .0005 cents per gallon of gas sold. Also, the Trump International Golf Course is on airport land.

The long-term non-aeronautical leasing generates a variable annual income of $4,008,911 for the airport.