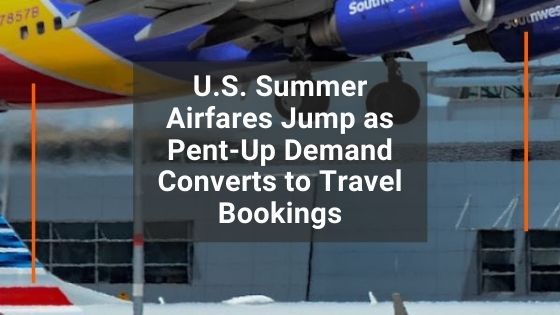 ALL THE GOOD FARE NEWS FOR AIRLINES SUGGESTS AN INDUSTRY IN RECOVERY MODE. OR MAYBE REHABILITATION IS A BETTER WORD FOR IT AS U.S. CARRIERS STILL HAVE A LONG WAYS TO GO BEFORE THEY RETURN TO FINANCIAL HEALTH.

A recent search for flights from Washington, D.C., to Denver for Memorial Day weekend — the symbolic start of summer in the U.S. — found few below $400. Similarly, if one wanted to take the family to Disney World in Orlando that weekend, fares on budget carriers start at $275 before fees.

Neither fare is terrible, nor are they particularly good deals, for travelers who want to get away over the popular holiday weekend. But the fact that consumers are not are not seeing amazingly cheap fares the moment they search a flight is good news to airlines. With capacity still down compared to 2019 and the “pent up demand” that executives have repeated ad nauseam seemingly materializing, carriers are finally able to raise fares and boost revenues.

U.S. airfares for travel in four weeks jumped a dramatic 63.5 percent during the week ending May compared to the one prior, a new report from Raymond James finds. That window includes Memorial Day with the jump likely driven by holiday travelers. But the rise also demonstrates what airlines repeatedly emphasized in their first-quarter earnings calls: both leisure demand and fares will be at or near pre-crisis levels in the U.S. this summer.

“All U.S. airlines appear to be benefiting from a broad-based strengthening of fares since March,” wrote Raymond James analyst Savanthi Syth.

That is music to the ears of every airline revenue manager.

Now, airline executives cannot get too excited. The data from Raymond James still show fares on average about $25 to $50 below 2019 levels — or about a 25 percent drop. And lucrative business travelers continue to sit out the recovery, with carriers relying on more cost-conscious vacationers for revenue.

During meetings with the senior leaders at American Airlines and Southwest Airlines earlier in May, J.P. Morgan Analyst Jamie Baker said neither would commit to fares returning to pre-crisis levels this summer. However, he noted in a report that the mood in the rooms gave him “high confidence that this is indeed a likely potential outcome.” And if that occurs at American and Southwest, their sheer size indicates that it is almost certainly an industry-wide trend.

American and Southwest carried nearly 46 percent of U.S. domestic travelers during the year ending in January — an almost five-point jump from a year earlier — Bureau of Transportation Statistics data via Cirium show. Together, they have consistently carried the most flyers in the U.S. since the pandemic began.

Another boon to the largest carriers is the return of basic economy fare restrictions. American, Delta Air Lines and United all have reinstated rules barring changes or refunds for the deeply discounted fares. This, according to Baker, removes a Covid-19 incentive — when all change and refund rules were dropped — for travelers to buy these fares and instead opt for pricier, more flexible options.

“We believe sell-up revenue will materially increase from here,” wrote Baker on the return of basic economy rules.

All the good fare news for airlines suggests an industry in recovery mode. Or maybe rehabilitation is a better word for it as U.S. carriers still have a long ways to go before they return to financial health. The next big hurdle will be keeping costs in check once federal payroll assistance covering most of the industry’s labor expenses sunsets in September. And, at least for American, Delta and United, the lack of most business and long-haul international travel will be a serious brake on their rehab.

And 2021 is far from a “normal” summer. Schedules remain significantly thinner than in years past and, with long-haul travel most shut, airlines are flying more widebody jets on U.S. domestic routes than they have since the 1990s.

“The schedule we have built is designed for the current leisure-based travel, that’s why we have [Boeing] 777s flying in the United States,” said Doug Parker, CEO of American, in April. “They’re not made to do that, it’s not going to be happening a year from now” — suggesting a more normal market may still be a year or more away.